Middle Tennessee is recovering from recent major flash flooding which resulted in the loss of 20 lives. Although the Southeast Conference does not have a church in Waverly, the UCC presence was there.  Working through the networks that exist through national and Tennessee VOAD (Voluntary Organizations Active in Disaster), the UCC provided a Disaster Response Solidarity Grant of $3,000 to assist the TN Wing Civil Air Patrol to provide needed communication connections for the volunteers and community.  Such grants are funded by contributions to One Great Hour of Sharing.

by Jeani Rice-Cranford, MDiv, M.S.E. They are a MID with the Southeast Conference and a member of the United Church of Cookeville.

The alarm blared. I couldn’t get my eyes open fast enough. I’d heard the downpour of rain beating against our tin roof throughout the night. It was still very dark. I read the clock. It was four-something. Wasn’t it? I couldn’t focus very well and I didn’t grab my glasses. Flash flood warning. I wasn’t surprised. It had been raining heavily for some time. I went back to sleep.

It is customary for us to have breakfast with my father-in-law on Saturday mornings. Our dogs were a bit afraid of the storm. The rain kept oscillating between steady and torrential. We made the decision to stay put — even though we live on the property with my father-in-law — neither of us wanted to go outside in this rain.

Within minutes of communicating this, my sister-in-law (who comes home each weekend) called; she told us Waverly was flooding. It was probably around 9:15 am. We immediately got dressed and headed to my father-in-law’s house. We quickly made our way to the front porch. We couldn’t believe our eyes. We witnessed the flooding in October 2019. That was pretty bad. But nothing could have prepared us for this. A river was raging through Waverly. And it didn’t belong there.

As we stood with our mouths agape, we could hear houses crashing into buildings. We watched storage sheds rushing to the west down what should have been city streets. We could hear crashing and popping and loud banging echoing in our little valley. The water was so loud! Raging, raging along. We could see white caps forming.

Rain continued to fall steadily. It was falling vertically. The wind wasn’t really blowing. But that water! It was moving so fast. “How can anyone navigate that?” I remember thinking.

Cries could be heard throughout our city. Now and then, we could make out the word, “Help!” People were stranded on rooftops. We would later learn many of our neighbors were swept away while still inside their homes; they were pulled out of the structures by the current; and then left to cling to telephone poles, floating debris, and corners of buildings as they clamored toward higher structures. Many of them were stuck in the flood water clinging for dear life for at least a couple of hours. 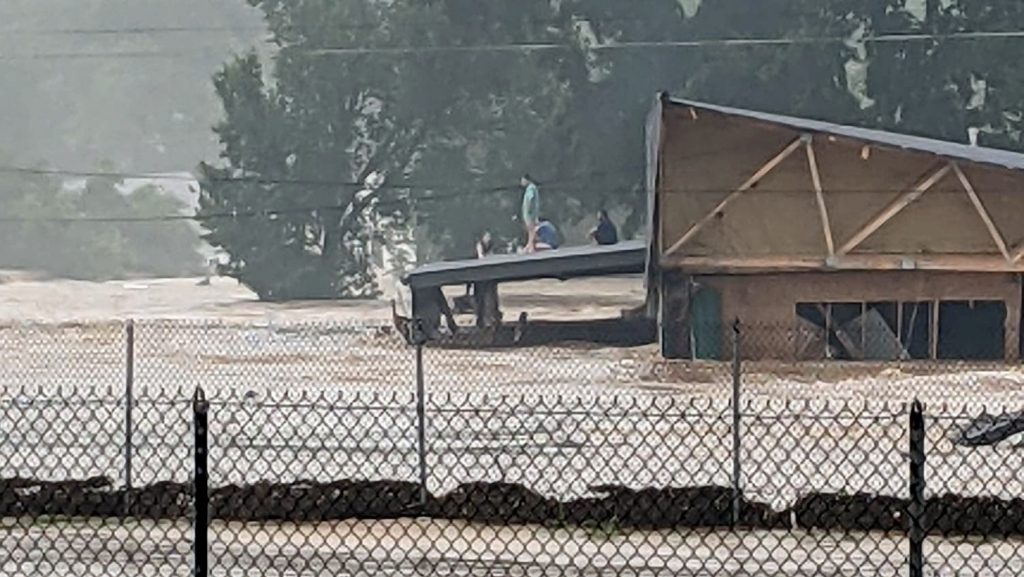 The photo you see of people on a rooftop is one I shot at 10:16 am. Waverly had been flooded for well over an hour at this point. The testimonies of the experience indicate water was seeping inside people’s homes as they gathered their things and prepared to flee. Within seconds, ankle-high water was suddenly chest-high. Many had no time to get out.

We stood on a side road looking across Highway 70 feeling more helpless than many of us have ever felt in our entire lives. I know this was my feeling. Gut-wrenching sadness overwhelmed me. I prayed. I prayed with fervor. It didn’t feel like enough.

It is estimated the water at the intersection just beneath our hilltop was between 10 and 12 feet deep at the height of the flooding. Throughout this area alone — just below our hill — there were many people trapped inside the attic of their homes, on rooftops, and standing on furniture inside their houses.

Here, in this photo of the rooftop of Superior Farms, four strangers gathered and stayed for at least another hour while rain continued to pour. Soaking wet ourselves, we stood fixed — praying for a miracle. Praying for a way to reach them. Praying for a way to help. We watched these four people intently. Praying the building wouldn’t buckle as more and more debris crashed into it. 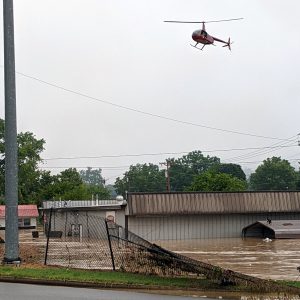 At 11:30 am, I took this photo of the helicopter. It had appeared out of nowhere and was bouncing back and forth across the highway. We finally realized the pilot was rescuing people. At the time, we didn’t know his name. We later learned Joel Boyers and his fiance Melody Among were inside doing all they could to help everyone they could reach.

The four survivors on the rooftop of Superior Farms were rescued — as was another person on the roof of the Exxon building. These five people were among the 17 rescued by this small helicopter that day. I captured video footage of each rescue in front of us (see the links below). These five people (along with 10 or 11 others) were sheltered on our family property. Our niece and nephew were in town and they were instrumental in getting people to the top of the hill. My wife scurried to and fro between our house and my father-in-law’s home gathering food, clothing, water, and supplies. A family friend who works in the medical field appeared at the perfect time and helped triage the injured.

Once the water receded enough, we were able to take one of the survivors to the hospital. My father-in-law, nephew, and wife got the generator rolling that afternoon and communication was back online. We began reaching out to families and getting information about local churches that were unaffected by the waters as they opened their doors and became shelters for those who were displaced.

My sister-in-law fixed a meal for one of the families we held in care. They had children with them. We pulled out sidewalk chalk for the kids and worked to engage and entertain them as we could. We listened to the stories of survival our guests needed to share. We tracked down families and pets. We prayed for them.

At the end of the day, we realized two of the families we sheltered lost loved ones in the raging waters. Joseph Reeves and Mark Kee both perished in the flood; and we held their families in care that day. As time passed, I realized Joseph Reeves was my coworker’s father-in-law. We’d sheltered two of his in-laws without realizing we were all connected. We are all now family.

My wife, Sandi, and I attended Joseph Reeves’s funeral. We will attend the service for Mark Kee. We continue to pray for both of these families — and for all of the families who lost loved ones that day. We’ve been thanked and featured and interviewed for all we did that day. While I understand the gratitude because I myself would feel the same way if I were in the shoes of these families and survivors, truth be told, my family waited a long, long time watching the horror unfold before our very eyes feeling so completely helpless. We literally were just doing all we could do in the moment when we were finally able to do it. We were just doing what we could. We were just being ourselves.

May God continue to reach each person affected by this devastation. May our eyes continue to be opened so that we can see the mercy and grace around us. May we feel God’s ever-present comfort and love as we grieve all that we must grieve. And may we continue to move forward together as a community — as a family — when it is time to rebuild. May God’s glory be found in the midst of such devastation. May God’s love be known. With deep gratitude for everyone who hears God’s still speaking voice, all honor and glory to our great God. How Great is our God indeed? 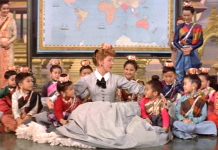 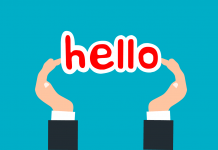