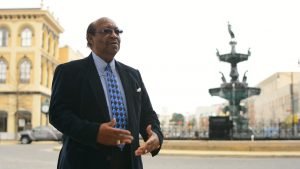 Rev. Dr. Farrell J. Duncombe, the pastor of First Congregational Church, Montgomery, AL, passed away in his sleep on June 2, 2021. He was a long-time resident of Montgomery.

Duncombe was inspired to help others early in life by Rosa Parks, his childhood Sunday school teacher.

Ordained by the African Methodist Episcopal Church, he served several AME local churches as well as serving in several capacities of leadership within the AME church.

In addition to pastoring, Rev. Duncombe was immersed in various aspects of music and education, serving as the Director of Bands and Administration in the Montgomery Public Schools and receiving many awards. For many years, he was considered one of the most prominent musicians and band directors in Southeastern US. He was the first Black band director for Sidney Lanier High School and later served as the school’s principal.

Please keep in prayer, his wife of 55 years, Juanita Delores; his two children, three grandchildren, and a host of nieces, nephews, cousins, and friends.

He was a father figure to generations of students, and he was the kind of man who never met a stranger, his two children, Farrell Duncombe II and Djuana Paden, said. “We loved him dearly,” Paden said. “He was a great example for us and he taught us the value of service to others. … He was definitely a lover of people.”

A Public Viewing will be held Friday, June 11 from 12 pm- 5 pm at First Congregational Christian Church, 638 High Street, Montgomery, AL 36104. This will be followed by a private memorial service from 6-7 p.m. The celebration of life will be at 11 a.m. Saturday at Pilgrim Rest Baptist Church at 1550 East Washington St. According to Duncombe’s obituary, the funeral will be by invitation only, however it may be seen via the church’s Facebook and YouTube pages. 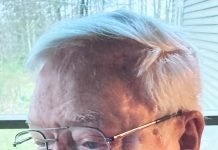 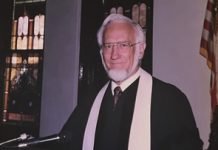 United Church of Huntsville helps those displaced by COVID-19 with food—and...