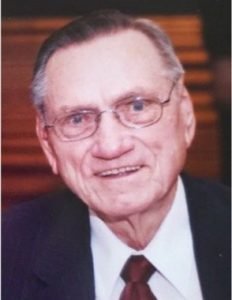 Edward “Ed” Dahmer, 92, Pleasant Hill, passed away peacefully in his home on July 19, 2020, with his wife and two daughters at his side.

He enlisted in the United States Navy during World War II, serving in the Pacific Theatre. During his service time in the Pacific, he made a commitment to enter the ministry when his service was completed. After his discharge from the Navy in 1946, he completed his high school diploma and enrolled in Yankton (SD) College and the Yankton School of Theology. He graduated with a Bachelor of Theology degree in 1951.

During his enrollment at Yankton College, he met Bernice Maisch, who quickly became the love of his life. Ed was fond of telling the story of his first date with Bernice, “…attending a football game of our Yankton Greyhounds. I can’t remember which team won.” Truth be told, as long as he was with Bernice he did not care who won. Ed and Bernice were married in Aberdeen, SD, on June 12, 1949.

He was ordained into the ministry on June 12, 1952, the second wedding anniversary of his marriage to Bernice, and answered a call to serve as a minister in McCook, NE. Following his ministry in McCook, he answered calls to serve as minister of Congregational churches in Brush, CO (’53), Biola, CA (’58) and Medina, ND (62). In 1963 he was asked to serve as the chief administrator of the newly constructed Wishek (ND) Retirement Home, where he served for 13 years. In 1976 he moved to administer the Uplands (TN) Retirement Community for 11 years until he was asked to serve as the chief administrator of St. Paul’s House in Chicago (IL) in 1987. He retired from St. Paul’s House in 1990. He and Bernice chose to spend their retirement in Uplands Retirement Community, a community they greatly appreciated.

Ed spoke often of the people throughout his life who provided important support and guidance to him: family, teachers, mentors, and great friends. He was too humble to make mention of the people for whom he provided guidance and support; he was respected and loved by those he served, always approaching challenges with a benevolent heart, a commitment to fairness, and a warm smile. Ed was a man of great service.
He is survived by his loving wife of 71 years, Bernice; three children, Linda (Francis) Crisman of Marana, AZ, Debra (William) Barr of Lake Oswego, OR, and Glenn of Federal Way, WA; six grandchildren and nine great-grandchildren. He will be the focus of toasts and stories at family gatherings for years to come.

A skilled writer and thoughtful speaker, Ed shared this wonderful reflection with his family, “Life has been good. Bernice and I have had each other; all the good we have known, the many blessings we have had; above all the love of a wonderful family that has been ours – our children, being with them in their growing years, sometimes feeling the hurt they have felt, but more happily, their joys and their successes, and now their families – their children, our grandchildren, and now our great-grandchildren. Life has been good! Hitherto the Lord has helped us!”

He was preceded in death by his parents, George and Mary Dahmer; and eight brothers and sisters.

The family is grateful for the support provided by the wonderful staff at Uplands and Caris hospice services. Memorials may be donated to Uplands Home Health or Pleasant Hill Community Church. A celebration of Ed’s life will be scheduled for a later date.

KUCC Provides Blessing and Commissioning for Teachers and Administrators

The UCC and the Villa International Experience