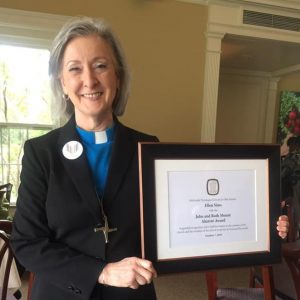 Methodist Theological School in Ohio has presented Ellen Sims with the John and Ruth Mount Alumni Award for Distinguished Service, the school’s highest honor for graduates. MTSO President Jay Rundell presented the award at an Oct. 7 luncheon during Alumni Day.

Sims, who earned a Master of Divinity degree from MTSO in 2006, is the founding pastor of Open Table United Church of Christ in Mobile, the first UCC congregation in southern Alabama. She serves the community in a variety of roles. She is the past-president of a Mobile organization called The Quest for Social Justice and a board member of Prism United, an LGBTQ support group for teens that her congregation founded five years ago. “Your pastoring in this area and your work have made an impact,” Rundell told Sims. “And it’s continued, here and all the way to Alabama.”

“I’m just overwhelmed with memories of my experiences and relationships here,” Sims said. “The theological education I started here has shaped and sustained me in my ministry ever since.”

Rev. Sims explains, in light of the well-publicized special General Conference vote earlier this year to reinforce the UMC’s discriminatory position against LGBTQ persons, that she could not have accepted the alumni award if MTSO had not already gone on record to oppose the denomination’s stance. She is proud that Open Table UCC was genuinely and fully celebrated by this United Methodist seminary.

The Mount Alumni Awards were created in 1990 to recognize graduates of MTSO who have achieved vocational distinction. The award program was created by the late John Mount, a founding MTSO Board of Trustees member, and his late wife, Ruth.

Two Installations in One Day