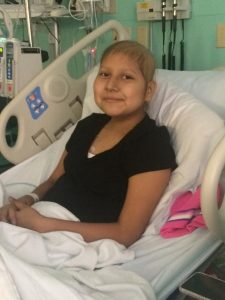 Ixcell Perez is a 14-year-old United States citizen suffering from leukemia. She was living in Chiapas, Mexico when she was diagnosed. Her mother Dalia traveled to the US border at San Ysidro and was planning to take her daughter to her birthplace in Raleigh, North Carolina so she could receive life-saving medical treatment. After being detained and treated with callous disregard for two days, both Ixcell and her mother were denied entry into the US.

A relative living in the United States traveled to San Ysidro and managed to get Ixcell across the border. But Border Patrol officials again refused to allow her mother to enter the country. CBP separated Dalia from her stricken child. Dalia was stuck at the border for four months.

Ixcell is undergoing painful and debilitating cancer treatments at Duke University Hospital in Durham. Two local United Church of Christ congregations, as well as Peace Church in Clemson, South Carolina teamed up with Solidarity Now, a new organization that works to connect solidarity communities in the United States with asylum seekers and children separated from their families. The congregations have been providing support and care for Ixcell as they advocate for reunification with her mother.

The congressman who represents Ixcell’s district, Rep. David Price, wrote a letter urging CBP to issue a travel document and permission for Dalia to enter the country on humanitarian grounds. Ixcell’s pediatric oncologist wrote letters urging that Dalia be granted a visa so she can be with her child during her cancer treatments. Ixcell needs the moral support and comfort of her mother as she fights this potentially fatal disease.

Through the concerted efforts of Solidarity Now, the churches, and broad coverage in both US and international media, Dalia was able to cross the border on Wednesday, August 28. As Ixcell begins a new round of cancer treatments, her mother is at her bedside.

Pastoral Message Regarding the Shootings in Atlanta