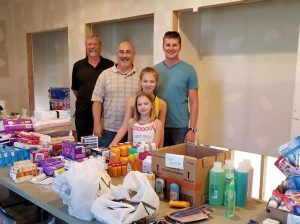 Being located on the Cumberland Plateau means that hurricane force winds and flooding are not something that affects the lives of the Fairfield Glade Community Church congregation.  However, when this congregation sees others in need, they willingly come to the rescue. During this season of hurricane disasters Community Church has shown that they truly believe in helping others. Over the past few months this Tennessee congregation provided over $7,500 in direct monetary relief, in addition to hygiene supplies, to churches in Texas, Florida and Puerto Rico.

As soon as the news of Hurricane Harvey reached Fairfield Glade, the Missions committee found a church in Cypress, Texas that needed help.  Christ United Church had just recovered from a 2016 flood and was flooded again.  The Missions committee started the drive with a $500.00 donation from their budget, and then the Women’s Fellowship donated enough from their budget to purchase and ship six boxes of hygiene supplies. The congregation donated money so that a $1,922.50 check was sent to the Cypress Church.

Hurricane Irma hit parts of Florida hard, and the Missions committee found Mision Peniel in Immokalee, Florida.  Mision Peniel helps the neediest in that area.  After the hurricane the needs were even greater.  Again, Community Church found a way to help.  The Women’s Fellowship purchased and shipped five boxes of hygiene supplies.  Donations made it possible to send a check of $1,465.00. 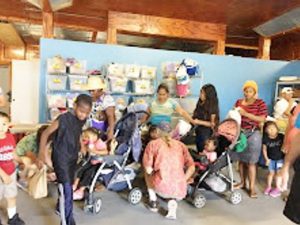 No one could believe the devastation when Puerto Rico was struck by Hurricane Maria.  But, the loving and caring people of Fairfield Glade Community Church knew that they could help.  It didn’t take long before another fund was established.  The congregation again reached into their hearts and pockets and $4,390.00 was raised and sent to the United Church of Christ Disaster Fund in Puerto Rico.

Fairfield Glade Community Church has been known as the “Friendly, Caring Church” from the time it was founded 42 years ago as the first church in the Fairfield Glade retirement community.  The members come from all parts of the United States but now call this church “home”.   Helping others has always been a special part in the life of this very special church.

March in the 2014 Atlanta Pride Parade