Rev. Troy Sanders, pastor of Rehoboth Fellowship of Atlanta UCC, participated in the Minister’s March for Justice on August 28, 2017. Here is his reflection.

The crowd slowly began gathering, but I could tell something quite special was about to take place. For me, this would be the first time in my lifetime that I had been apart of national, planned demonstration (and in our nation’s capital to say the least). The timing for me seemed right but I must admit I felt the press of getting there. I preached at our 3:00 p.m. service, and flew out on the next available flight which had me arriving in Washington, DC at about 11:30 p.m. After checking into the hotel, I made my way to bed after midnight for a next day that began promptly at 7:30-8:00 am.

As we crested the powerful and towering monument of Dr. Martin Luther King, Jr, I begin seeing a sea of clergy collars adorned by people of every color, race, nationality, and gender. I suddenly became very aware that the group I proudly named myself a part of had a synergistic pull that left me proud to be called a minister on that day. After checking in and receiving my badge, we all stood around waiting for the beginning of the pre-march festivities. But it wasn’t a sitting idly by in a passive state. As more and more ministers poured in the gates that day, I suddenly found myself feeling like I was back at my family reunion in the deep south. So many familiar faces who I either had heard of (and was even intimately acquainted with some of this theological/homiletical work) but never had the opportunity to meet in person, or those I had come to know and love who I had just not seen in some time. A ministerial family reunion for sure!

I experienced the group also freely engaging individuals who were strangers to us naturally but we discerned their hungry for justice and aligned with their part in this fight for equality for which we had gathered. I was loving every moment of it. However, nothing had prepared me for the eloquence of speech, powerfully prophetic, and yes intentionally crafted words spoken by dozens of women, men, children, African Americans, European descent, Latin Americans, Hispanics, Native Americans, Lesbian, Gay, Heterosexual, Christians, Muslims, Hindus, Sikhs, and Jews who stood on all seem to stand on the side for justice for all that day. It gave me hope and left me with a passion to go back and continue the work of justice in my local area.

And then there was the march itself. We chanted, we rallied, we laughed, we forcibly raised our preverbal fists (and physical in some cases) in the face of what has become associated with institutionalized racism, homophobia in the church and government, and nationalism that seeks to isolate our immigrant population. I must admit I cannot wait to reconvene on our local levels to debrief and regroup for our next political action.

While I’m too young to have participated in the March on Washington, I found myself constantly thinking “If today felt like this with 3,000 plus people, I just can’t imagine if I would have been able to contain all of what that sea of justice warriors gathered would have evoked in me. I so thankful that had the opportunity, and the motivation to make that journey. So would probably asked (through lips dripping with cynicism), “What did it actually change in our president, elected officials or our world?”  I would simply reply, “The more appropriate questions to/for me is “WHO did it actually change?”  And I would have to say if you need a witness, “Here’s one.” 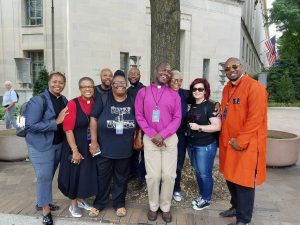 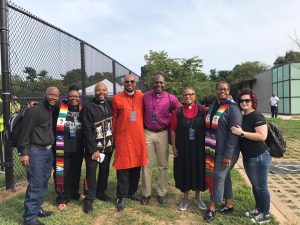 Mary and Bill Ruth Commissioned as UCC Partners in Service

ONA Blossoms in the “Heart of Dixie”