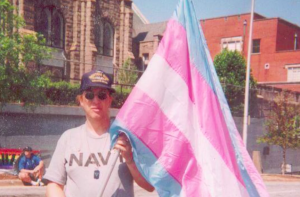 Monica Helms created the flag in 1999 after serving in the US military for eight years. Helms is both a proud Navy veteran and a proud transgender woman. She is also the creator of the original pink, white and blue transgender pride flag. Even better, she’s a member of Pilgrimage UCC in Marietta, Georgia!

Monica served in the Navy between 1970 and 1978 as a submariner. She joined the service after receiving a low draft number during the Vietnam War, and rather than risk being drafted into the Army, she decided to voluntarily join the Navy. Shortly after, she volunteered to serve on submarines.

It wasn’t until years after her military service, in 1987, that she realized that she was trans and eventually decided to transition. Since coming out, Helms has been a passionate advocate for trans rights and specifically for trans visibility in the military. And in 1999, she created the blue, pink and white transgender pride flag.

Following the President’s tweets about transgender people serving in the armed forces, Monica has shared her story with media locally and around the globe. Here are some great interviews:

Voting Faithfully: Resources from the UCC, Episcopal and Lutheran churches