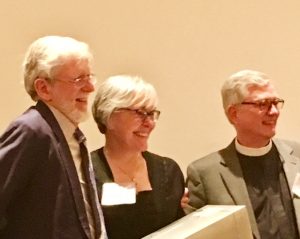 Margaret Graff & Richard Higgins, members of Kirkwood UCC, were honored on March 21, 2017 at the annual Day 1 benefit and celebration. They, along with the Rev. Dr. Joseph E. Lowery, John Schuerholz, and Rev. Dr. Thomas G. Long were lifted up for their commitment to the good of the community and deep commitment to their church and Christian faith. The event supports the Day 1 ecumenical radio and internet ministry (formerly known as The Protestant Hour) which has broadcast sermons by outstanding preachers from the mainline denominations for over 70 years.

Dr. Tim Downs nominated Margaret and Richard for their faithful work among us and in the world. Margaret is a private wealth advisor with Ameriprise Financial, where she has been working since 1991. Earlier, she was an assistant professor of physics at Georgia Tech. She earned degrees DePaul University, University of Oregon, and Harvard-Smithsonian Center for Astrophysics. Richard Higgins’ career was spent at Georgia Tech and University of Oregon as a professor. He was educated at MIT and Northwestern University. Now retired, his activities are directed to philanthropy. Richard and Margaret lead the Mundito Foundation.

“Working together, Richard as the CEO of the Mundito Foundation, and Margaret as the CFO they have built a foundation, the mission of which is to change lives of individuals who live with inadequate resources, public health care or education. The goal of the foundation is to address specific and solvable problems efficiently, and seek to change lives by undertaking projects that have a large impact on small groups. Richard and Margaret are active members of Kirkwood United Church of Christ, and committed participants in its life.”

Day 1 began in 1945 when leaders of several major denominations and church-related colleges and seminaries came together with the goal of spreading the good news through radio. Every week since then, the program has presented compelling sermons from outstanding preachers from across America, bringing faith and hope to hundreds of thousands of people around the world.

Produced and hosted by Peter Wallace, Day1 is distributed nationally to more than 220 stations each week, including WSB in the Atlanta area (AM 750 and 95.5 FM, Sundays at 7:05 a.m.). It is also accessible by podcast at Day1.org. The award-winning program is produced by the Alliance for Christian Media in association with the Cooperative Baptist Fellowship, the Episcopal Church, the Evangelical Lutheran Church in America, the Presbyterian Church (U.S.A.), the United Church of Christ, the United Methodist Church, and other denominations. For more information, visit Day1.org.