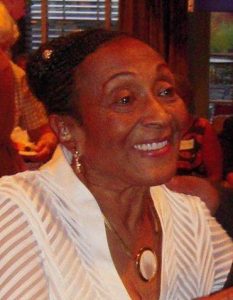 Dr. Erna Ballantine Bryant, 87, of Atlanta, Georgia, passed away surrounded by family and friends on February 22, 2017. Erna was the only black woman in her class at Harvard. She completed her Doctorate in Education Administration from Harvard University in 1974.

Dr. Bryant was a talented and passionate writer and orator. She read constantly and traveled widely. During her lifetime, Dr. Bryant visited 33 states and 20 countries. She felt a deep connection to the people and culture of Barbados, her mother’s birthplace. She spent extended time on the island and spoke fondly of the Bajan way of life.

Her funeral was held at First Congregational UCC, Atlanta on Saturday March 4.

For more about Dr. Bryant, read this article from the Boston Globe: Erna Ballantine Bryant, 87; led Massachusetts Commission Against Discrimination