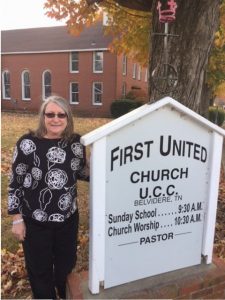 Pastor Jan Whiteman has received and accepted a call as pastor at First United Church UCC in Belvidere, Tennessee. Jan was born and raised in Northeast Pennsylvania and is a lifelong UCC member.

Returning to Belvidere feels like returning home! Jan lived in Belvidere for three years between 1993 and 1996 when her husband, Karl served as pastor at First United Church UCC. During those years, Jan served as Secretary of the Southeast Conference Board of Directors.

Jan has been a Licensed Pastor in the Northwestern Association of the Iowa Conference since January 2011. Before becoming licensed, she served as an unpaid/intern associate at Union Memorial Church in Milford, IA where husband Karl began serving as Senior Pastor in November of 2008.

Jan completed numerous seminary classes online through Covenant Theological Seminary in St. Louis, MO while the couple was serving as a fully-appointed Mission Personnel with Common Global Ministries in the Republic of the Marshall Islands and the Federated States of Micronesia between 1996-2003. She has also completed the Certified Lay Ministry Training through the Iowa Conference United Church of Christ. Jan intends to pursue ordination as she serves as licensed pastor with the fine folks in Belvidere.

Jan says, “Tennessee, and especially Belvidere, has held a special place in our hearts. We have maintained long-time friendships with the families there, as well as with many in the churches in the Southeast Conference. As we return however, our roles are now reversed! I will serve as pastor at First United Church. Karl is content to be a retired pastor’s spouse, and plans to find work and ministry in the secular world…We’re coming home!”

Jan begins her ministry in Belvidere on November 27. 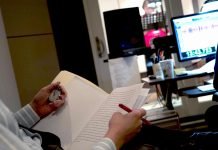 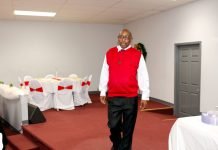