In light of recent events including the back-and-forth between the Khan family and the Donald Trump campaign, the UCC Communications Team wants to make folks aware of an interfaith initiative of inclusivity we launched last month and invite you to participate.

The Building Bridges initiative invites all people across the wider church build relationships between Christians and Muslims in local communities around the country. The one-church effort to extend the extravagant welcome of the United Church of Christ to all is building on a successful Pacific Northwest Conference Ramadan initiative, ‘Honoring Sacred Time,’ which posted visible signs of welcome, solidarity and support for Muslim Americans in dozens of churches around Washington state.

“This initiative is very much in line with the spirit of love and compassion that the gospel invites us to bear witness to. While we celebrate this bold, public witness, we also realize that Muslims in America live in fear all the time. It is going to take a concerted, collaborative effort on our part to shift the dialogue and engender feelings of trust, of love, and of mutual support across interfaith lines.” John C. Dorhauer, UCC General Minister and President

There are four simple actions individuals and congregations can do to get involved:

The Building Bridges webpage offers resources and ideas to help you get started.

“I was very impressed to see General Minister John Dorhauer and PNW Conference Minister Mike Denton dedicate so much time and thought into conceiving and rolling out the ‘Honoring Sacred Time’ project. All I can think of are the thousands of American Muslim children growing up across our (Washington) state, and millions across our nation. When they pass by a UCC church on the way to school or to soccer practice and see a sign publicly and vocally telling the public that American Muslims are our neighbors, it tells them that American Muslim children have the right to the same aspirations, hopes and dreams as every other young American. The responses from UCC churches across (the Pacific Northwest Conference) and beyond also really speaks to the values and the character of UCC leaders. They really are showing the country what it means to ‘do to others what you would have them do to you.'”
Arsalan Bukhari, Executive Director, the Council on American-Islamic Relations (CAIR), Washington 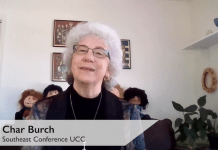 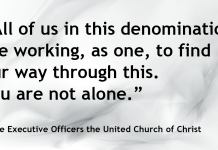 Responding to Recent Events in Charleston and Beyond