Katie O’Dunne, one of our Southeast Conference Members-in-Discernment, was featured in the Fall/Winter 2015 magazine of Woodward Academy. She joined Woodward, the largest private school in the continental United States, in August 2015 as the new campus chaplain. Katie is a 2015 graduate of the Candler School of Theology and an active member at Kirkwood UCC in Atlanta. She is in the final stages of her MID process and plans on being ordained in Spring 2016.

Katelyn O’Dunne arrived at Woodward Academy seeking to foster collaborative interfaith dialogue. She wants to prepare students to be catalysts of change in college and beyond. 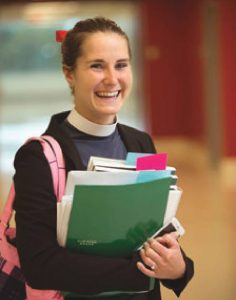 Before she joined the Academy in August 2015, Katelyn O’Dunne— called Katie or Chaplain K by her friends and colleagues—had already developed a passion for interfaith dialogue as a tool for social change. She worked with her fiancé, also a pastor, at a homeless shelter that doubles as a church. There, Katie learned how faith can unite people and overcome obstacles. “The shelter was a place for marginalized groups who felt separated from the community to feel a sense of belonging through faith,” she says.

A member of the U.S. women’s triathlon team, Katie also has a passion for running. While working at Back on My Feet—an Atlanta nonprofit which using running to empower homeless people—she found the inspiration to merge faith and education. “I was running with a gentleman,” she says. “And we had a conversation about faith and the root causes of poverty. He believed that the key to alleviating poverty was education, and a light went on for me. I knew I had to work with children.”

Now, she seeks to instill in students the belief that embracing differences can have positive social effects. The chaplain teaches four Comparative Religion courses at the Upper School and has restructured the curriculum to focus on real-world issues and ecumenical dialogue. “Students pick one issue—like commercialism, government, or extremism—and analyze that issue through seven different religions, showing them how these practical concepts are shaped by faith,” she explains. 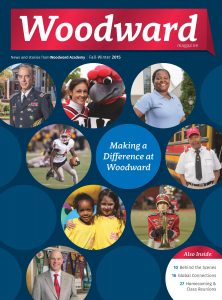 Katie’s efforts extend outside the classroom. She is building an ecumenical religious club and holding biweekly interfaith prayer services so that religious groups on campus can unite and discuss current events from different perspectives. To test-run this initiative, student leaders from four religious organizations co-authored an interfaith prayer for Founders Day. “These student leaders hadn’t even met each other before,” Katie says. “To me, that was the biggest piece of evidence that interfaith collaboration has room to grow.”

For younger students, she approaches interfaith diversity in a more subtle way, reading books to children in the Primary School and conducting Chaplain Chat lunches with Lower School students. The aim of both initiatives is to build a relationship with all students. “It might not be obvious that reading or lunches support interfaith collaboration,” she admits. “But I want to get face time with younger students so they can feel comfortable discussing these issues when they are older.”

The chaplain hopes to foster a tolerance for differences that can overcome pressing societal issues, like poverty and conflict. “There’s so much violence in the world, and it is important to have leaders capable of approaching the differences that cause violence with empathy and compassion,” she says. “Woodward students will be those leaders in 10 years, and it’s my job to help them make positive change in the world.”

Bill and Mary Ruth are Partners in Service Volunteers at Uspiritus