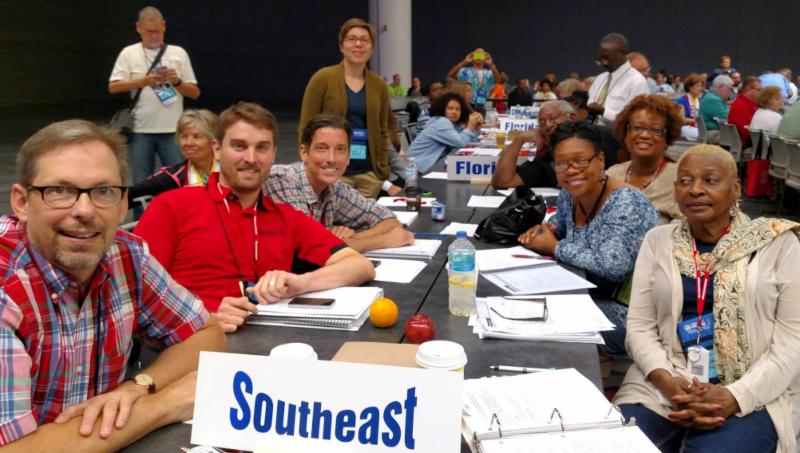 We asked our delegates to the UCC General Synod 30 to reflect on their time in Cleveland. Here are their observations.

From June 26 through July 1, I was totally immersed in the work of the United Church of Christ’s General Synod 2015, Unexpected Places. Being a delegate for those 5 days is not for the faint of heart! We worked and studied and listened and worshipped from 7 a.m to sometimes 10 pm at night. Good work. Heart changing work, for the 8 delegates from the Southeast Conference. To describe a favorite part of General Synod is difficult, but what I have held onto since leaving Cleveland is the struggle for peace in Palestine and Israel. I worked on the committee resolution calling for the United Church of Christ to Take Actions toward a Just Peace in the Israeli-Palestinian Conflict. For many hours we listened to and talked with leaders from Palestine and UCC Global Ministry Partners working in Palestine and Israel. There is a great deal to be learned about the plight of these two nations trying to co-exist with each other. The resolution did pass. As a delegate, I would encourage pastors and congregations across the SEC to begin or continue Interfaith dialogue and to support the resolution for boycotts, divestment and advocacy. Learn more at http://synod.uccpages.org/resolutions/

Synod 30 was intense, renewing, revitalizing, energizing, and enriching! Synod 30 was a time of worship, wonderment, sharing, caring, problem solving and education.  It was a time of re-connecting with old friends and establishing relationships with new friends. Synod 30 can best be described as “THE GREATEST FAMILY REUNION, EVER”!! So grateful for the opportunity!

An element of anticipation as a first-time delegate certainly resonated in my spirit throughout General Synod 30. And our theme, Unexpected Places, coincided with this level of anticipation, providing constant experiences of our Still Speaking God in non-normative places and spaces. As a community we participated in spirit-filled worship, expressed our views on resolutions and celebrated accomplishments and victories as ambassadors for justice. Several personal “God moments” also existed during Informal sharing at optional dining events and receptions, passionate discussions of resolutions and participation in the “Stuff the (Back) Pack” Service Project. This first-time experience as a delegate not only enhanced a sound commitment to justice but also provided opportunities to identify new avenues of hope and expectancy as our Still Speaking God continues to present “God moments” in unexpected places and spaces.

It was an enlightening experience to be a voting delegate at the 30th General Synod in Cleveland, Ohio. I had the chance to visit the Church House and Amistad Chapel for the first time. I also met new colleagues in ministry and connected with old friends I hadn’t seen in years. Celebrating the historic ruling on marriage equality with close to three thousand people was certainly the highlight of the week. Our delegation accomplished many things in just a few short days. We voted to elect Rev. Dr. John C. Dorhauer as our new General Minsters and President. I have confidence Rev. Dorhauer will lead our denomination with excellent care and a unified vision for the next four years. We also passed resolutions concerning divestment from Israel, the injustice of mass incarceration, and transitioning from fossil fuels to renewable energy. Being a part of plenary and the debates around these important issues was another reminder of the commitment the UCC has to justice and peace. Amidst our business meetings, we worshiped, fellowshipped, and of course celebrated being together as a united body focused on the work of the church in the future. I encourage anyone who is interested in learning more about the UCC to attend General Synod in 2017 in Baltimore. I will certainly be there!

I have many fond memories of General Synod 2015.  The context and backdrop of the gathering occurring during the week of two landmark decisions by the Supreme Court.  The first was announced as I was getting on a plane. Upon learning that the subsidies would continue for the Affordable Care Act I immediately called my wife and broke down in tears. Two years ago, I decided to return to my insurance practice because the agents in our community were not helping our lower-income neighbors, most of whom are African American, enroll in “Obamacare.”  With the Republican obsession with putting an end to the Affordable Care Act, I wasn’t sure how things would turn out. With that announcement, the hundreds of people I had assisted could keep their healthcare. Taking justice to the streets is not without its risks. In my case, our family’s income had been at risk because of my career decision to help people sign up for affordable health care.  For now, this threat was stopped.

I was in the hotel room when I saw the announcement about the second SCOTUS decision which struck down laws that prevented same-sex marriage and thereby granting justice to folks who have been historically discriminated against and it seemed fitting to be able to text the news to my sister Kristen and John Dorhaurer, the incoming President of the UCC. John replied “Sweetness!!!!!”  And it is. John proclaimed that this ruling would not have happened without the work of the UCC. I suspect that he is correct.  On July 4, 2005, at the 25th General Synod of the United Church of Christ in Atlanta, delegates voted to adopt the resolution, “Equal Marriage Rights for All.” I had a chance to congratulate retiring UCC President Geoffrey Black suggesting that this decision was perhaps a capstone to his tenure. He smiled and said, “I guess it is. I hadn’t thought about it that way.” Later on during the conference, was able to meet up with a couple of friends Sandy and George Uhl from the Middleburg Heights UCC. This couple introduced me to the UCC back in 1988 when they started an 11 year run of bringing missionaries from there congregation to the mountains of West Virginia where I had founded Almost Heaven Habitat for Humanity. From the context of big events to the intimacy of personal conversations, General Synod 2015 will leave long-lasting joyful memories.

I’ve attended many denominational national gatherings as a presenter and vendor through my work with The Fuller Center for Housing. This was my first experience as a voting delegate and I enjoyed learning about the process for bringing resolutions to the Church to for corporate affirmation or rejection if the case may be.

Some of the resolutions have me wondering if they will make a difference. Others, seemed like it was worth making a statement even if there was little a congregation can do. For example we are now aware of the issue of space trash. But it is not like we can put on some orange safety vests and grab some lawn and leaf bags and spend a day picking up celestial litter. Truth be told, I wonder if taking as stand on divestment from corporations who profit from the Israeli and Palestine oppression will move us towards a lasting peace. It worked for the Nestlé baby formula boycott in the 1970s, but solving the Middle East situation seems harder than catching space trash.

Perhaps this is why the Spirit selected me for something much more tangible to work on when I was put on the committee working on a plan to develop a network of churches that are welcoming, inclusive, supportive and engaged (WISE) for mental health. I thought, hey, this is something even our little house church can do. As I reflected on our members, I realized that each one of us has been deeply impacted by mental health issues.  We need to do this.  And we have. We started studying mental health and adopted the WISE Covenant. We’ve invited two guest speakers to share with us about their work through the Middle Flint Behavior Health Care agency and the Rosalynn Carter Institute for Caregiving.

Molly Phinney Baskette’s sermon on Friday evening June 26th (starting at 2:05) helped put things into perspective for me.  She taught me that inside each of us we each have a little Sarah Bareilles brave voice.  Collectively, these voices shared in the public square does indeed nudge the moral arch of the universe to bend toward justice.  Sometimes that nudge comes from a proclamation in the form of a church resolution demanding that the inertia of apathy be given a holy jolt.  Other times, the nudge comes from a friend giving a caregiver some respite from her daily effort to assist a loved one with an autistic child or a parent with Alzheimer’s disease.  Sometimes it is as simple as offering a quiet prayer when folks feel like they haven’t got a prayer.

Church work is meaningful work. It risks taking action on things that are seemingly intangible if the cause is right and the Kingdom, and in the case of space trash, the heavens, would be better served through the visions of prophets. Sometimes it is so tangible, and so simple like standing with our brothers and sisters in Charleston, changing the offensive names of sports teams, taking down the Confederate flag and allowing same-sex couples the same legal rights that the rest of the population enjoy. And then there is the work of hope. The hope for peace and justice in the Middle East. The hope that Christians who disagree on many things can find a way to live together without being disagreeable. I would encourage everyone in our Conference to attend a general Synod gathering. The experience and sense of renewal will be good for your soul. 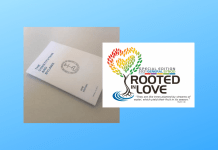 Response to the Charlottesville Events from the Conference Minister