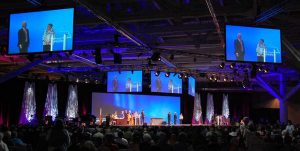 What a difference just a decade makes. Ten years ago, the Southeast Conference was host to the 25th General Synod of the United Church of Christ held at the Georgia World Congress Center. The “Still Speaking” campaign was less than a year old and the controversial advertisements were making national headlines just months before Synod. Additionally, it was in Atlanta that the UCC made national headlines by voting to become the first major denomination to support marriage equality. The Southeast Conference embraced and affirmed this as an appropriate and faithful step in widening the circle of inclusion in the name of Christ, and it was during this exciting and challenging time that seeds of change were planted.

Now, just 10 short years later, those seeds have blossomed into a vibrant, dynamic and fast-growing community of congregations where the full diversity of God’s wonderful creation is in bloom. In 2005 the Southeast Conference had 46 churches. Even with the departure of eight congregations following the 2005 Synod, the conference has grown to 58 active congregations. The conference is home to 15 different traditions, ranging from African-American Congregationalism and Afro-centric Christian churches, to Emergent/Postmodern Christian and LGBT-centric congregations. The Southeast Conference is justifiably proud of its welcome to all, especially given the historically diverse backgrounds of each community, and will be celebrated during the conference’s 50th anniversary in 2016.

The Rev. Dr. Tim Downs, former conference minister, says that it was definitely the Still Speaking campaign that made a huge difference in the South. “The impact of a consistent witness to social justice and inclusivity by the national church made all the difference,” says Downs. “With the significant growth of the urban and suburban South, many people are looking for a church that values Christian unity, celebrates diversity, and proclaims a Gospel of justice and welcome to all. There is truly a need for an alternative Christian voice among the churches of the South, and the Southeast Conference is addressing that need.”

Since 2005 the Conference has established seven new churches and welcomed six churches seeking to affiliate with the UCC. The Rev. June Boutwell, the current designated conference minister, says, “by and large these congregations are the most rapidly growing in the conference. It is noteworthy that almost 25 percent of our congregations are new to the UCC in the last 10 years.”

Since 2000, well over half of the members of our churches have become members of the UCC. The Rev. Boutwell reports that a week does not go by that she receives a call or email from a pastor or congregation seeking information about affiliating with the UCC.

As the United Church of Christ looks to the future during this 30th General Synod, we recognize and appreciate the work done 10 years ago in Atlanta and we celebrate that God is Still Speaking!

Don Harris is the communications director of the Southeast Conference of the UCC in Atlanta.