A few highlights from Day One of the 2015 General Synod (the biennial national meeting of the United Church of Christ) in Cleveland, Ohio:

Resolution sponsored by the Southeast Conference regarding the Charleston Shooting

At the opening session of the UCC General Synod  the Southeast Conference submitted a resolution entitled “A Just and Compassionate Response to the Shooting at Emanuel A.M.E. Church in Charleston, South Carolina.”  The sponsoring delegate was Rev. Jeremy Rutledge, minister at Circular Congregational Church in Charleston. Other sponsoring delegates were Carrole Moss of Victory for the World Church in Stone Mountain, Georgia, Rev. Dr. Marvin Morgan, interim minister at Pilgrim Congregational UCC in Chattanooga, and Rev. Ervin Milton of Greensboro, North Carolina in the Southern Conference. 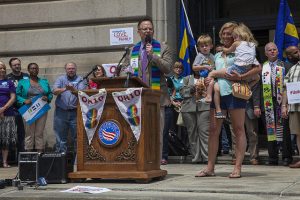 Many attendees at General Synod attended a rally at Cleveland’s city hall where Ben Guess, Executive Minister for Local Church Ministries and Mike Schuenemeyer, Executive and Minister for LGBT Ministries in Justice and Witness Ministries addressed the crowd. A number of folks from the Southeast Conference will join others from across the UCC to participate in Cleveland’s Gay Pride Parade on Saturday. There was a caution, however, that we have not “won” the battle but rather that the battle has shifted to religious exemption laws which will allow business owners to refuse services to people that don’t fall within that business person’s religious belief system.

Seeds Planted at the 2005 Synod in Atlanta are Blooming

An article written by our Conference Communications Director, Don Harris, was published by the UCC News Team on the General Synod website. He writes, “Ten years ago, the Southeast Conference was host to the 25th General Synod of the United Church of Christ held at the Georgia World Congress Center. The “Still Speaking” campaign was less than a year old and the controversial advertisements were making national headlines just months before Synod. Additionally, it was in Atlanta that the UCC made national headlines by voting to become the first major denomination to support marriage equality. The Southeast Conference embraced and affirmed this as an appropriate and faithful step in widening the circle of inclusion in the name of Christ, and it was during this exciting and challenging time that seeds of change were planted.

“Now, just 10 short years later, those seeds have blossomed into a vibrant, dynamic and fast-growing community of congregations where the full diversity of God’s wonderful creation is in bloom. In 2005 the Southeast Conference had 46 churches. Even with the departure of eight congregations following the 2005 Synod, the conference has grown to 58 active congregations. The conference is home to 15 different traditions, ranging from African-American Congregationalism and Afro-centric Christian churches, to Emergent/Postmodern Christian and LGBT-centric congregations. The Southeast Conference is justifiably proud of its welcome to all, especially given the historically diverse backgrounds of each community, and will be celebrated during the conference’s 50th anniversary in 2016.”

Join Us Virtually from Home

Prayers are invited for the Southeast Conference delegates and visitors and the 3,000 people in attendance at General Synod. 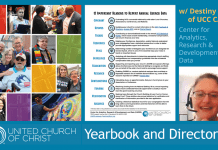 The Urgent Work of Racial Justice and Equity

Celebrate Love of Creation by planting trees for Earth Day