Open Table UCC in Mobile, Alabama held a successful fundraiser on January 3 in support of a local lesbian couple fighting for the right of second parent adoption of their child.  The couple, Kim McKeand and Cari Searcy, were legally married in the state of California in 2008, but their marriage is not recognized in the state of Alabama. The couple decided to pursue Cari’s right to adopt Khaya after being denied the opportunity to administer care to him in the hospital after an open-heart surgery required shortly after his birth.  The couple has amassed almost $40,000 in legal fees in a case that is currently being heard in the Federal Circuit Court in Mobile, and may eventually go to the United States Supreme Court.  Open Table partnered with a local LGBT support organization, Wave of Hope, to plan the fundraiser which involved a wine and cheese reception followed by the screening of the 2011 film “Cloudburst” starring Olympia Dukakis and Brenda Fricker. The event was well received with 55 in attendance and $1742.25 raised for the couple. Reverend Ellen Sims was interviewed for an article that appeared online in the local paper, al.com, and a supportive article also appeared in Mod Mobilian, an online magazine.  Event organizers felt sure that the event would have had more participants and donations if it had not poured rain all afternoon, but were pleased with the results and the opportunity to raise public awareness about the issue of marriage equality and about the presence of Open Table UCC in Mobile.  Ellen Sims commended the lay leadership of Open Table for meticulous planning, a joyful synergy among all the volunteers, and the spirit of Love that pervaded the entire event. 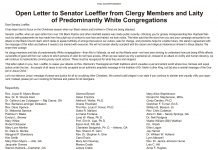 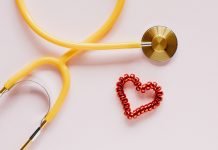 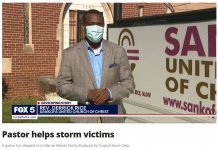 Protest During a Pandemic – Lessons from the Struggle for Justice