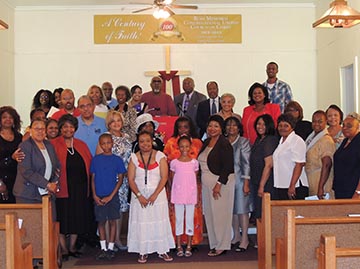 Rush Memorial Church celebrated its 100th anniversary in September, with a 6-week series honoring different missions of the church and the people who lead them. This small but mighty church, known as “the little church with the big heart” began with the name “The People’s Church” and was known for helping the poor in Atlanta. Throughout the hundred years that the congregation has served, it has been a leader in the Black community, starting one of the first private schools for Negro students in the 1920’s, becoming a meeting place for the Civil Rights Movement, and the host to the first African American Boy Scout troop in Atlanta. The church was renamed “Rush Memorial” to honor the first pastor, Dr. John A Rush during the tenure of the Dr. James Bond, the second pastor of the church.

One of the primary missions of Rush Memorial has been to support students of the Atlanta University Center Consortium, which includes Morehouse, Spelman, Clark Atlanta University, Interdenominational Theological Center, and the Morehouse School of Medicine. This has been a mission of the church throughout its history and helped to get the church heavily involved with the Civil Rights Movement, when it connected with Lonnie King and Julian Bond, then students at Morehouse College. It was too controversial for students to meet on their campuses so Rush Memorial offered them space to gather to plan and organize. Rush Memorial not only gave them a meeting space, but provided them with office space for the movement as well. Lonnie King was a leader for the Committee on the Appeal for Human Rights, and Julian Bond who influential in the Student Nonviolent Coordinating Committee (SNCC) and later became one of the first members of the Georgia House of Representatives and also served as the chair of the NAACP.

Today the church continues to serve students, providing for their needs while they are in school. Each year they welcome students back to school in the fall with a cookout on the church lawn. Dedicated members, such as Mavis McMullen, Robert Humphrey, and Brendi Lawson cook for the students during the week. Every Sunday Phillip and Shirley Jenkins, bring students to Golden Corral in a van where the students are so welcome there that they don’t have to use the front door anymore. Most importantly, the church listens to the needs of the students and develops relationships with them. In return, the students have done great things for Rush Memorial as well. Michael Hayes, for instance, organized Rush’s men’s chorus while he was a student at Clark Atlanta University. Most recently, 20 students from Morehouse and Clark Atlanta University helped move furniture and prepare the church for fresh paint and new carpet in anticipation for the 100th anniversary celebration. 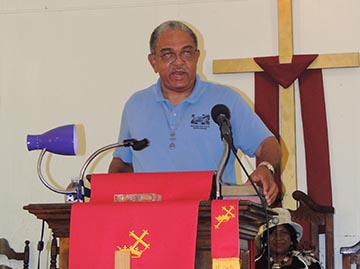 Rev. Lawrence E. Calbert, the current senior pastor of Rush Memorial, has served since 1989, bringing the church into greater involvement with the UCC by being involved at both the Conference and National levels. He has continued the drive for service in the community, heading up a building project for a new fellowship hall in 2010, dedicated to Pastor Emeritus Joseph E. Boone, a place where relationships can be fostered. Rev. Susan Mitchell also serves at Rush Memorial, as well as working for the National UCC in the Office of Philanthropy and Stewardship.

On October 10th, the city of Atlanta honored Rush Memorial for its long-standing work in the city. This year Rush Memorial was also honored by Rust College in Mississippi for its contributions to education and music.

Special thanks to Mrs. Regina Finklin, for sharing this history with the Conference. She has been a member at Rush Memorial since 1967. Her daughters, both in their 30s, are still very active in the church.