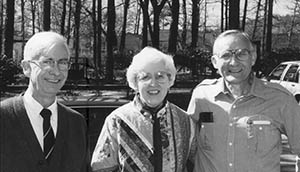 We are saddened to share the news of the death of Roger Knight on May 22nd. Roger served as conference minister of the Southeast Conference from the fall of 1988 to the spring of 1995. He is survived by his wife Beth, and four children, Steven, Geoffrey, Eric, and Leanne. Roger and Beth have been residents of Uplands Village, Pleasant Hill, TN, since 2009. They have been very active in the life of Uplands village. The memorial service will be held on July 13th at 3pm at Pleasant Hill Community Church. Condolences may be sent to Mrs. Beth Knight, PO Box 426 Pleasant Hill, TN 38578.

Born in 1933, Roger Knight was ordained in the Eau Claire Association of the Wisconsin Conference in 1959. He served as a new church start pastor in Wisconsin, then continued ministry in various settings of the UCC, regionally and nationally for 25 years, before coming to the Southeast Conference.